Diary of a Bereaved Mother: Bereaved mothers of yester-year

This is my maternal Grandma aka Bodai whose real name was Lia Yi, she is the grandma I spent most time with among my 3 grandmas. I absolutely forgot that she was a bereaved mum too, when I wrote about the other two. How could I have forgotten? This is because poor Grandma was born in an era that it was taboo to talk about dead babies. Sorry Grandma. 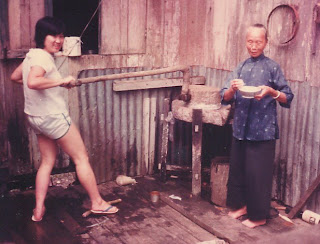 I went to visit her showing off my husband whom I wed in New Zealand. She insisted on making her kind of Cantonese/Hakka cakes for her new grand son -in-law, whom she was very proud off, a first SIL who had a university degree.
She loved making all sorts of Chinese cakes. She made them from scratch, grinding her own flour from rice grains. She wanted to make some of her special cakes for the water engineer, one of her new grandson in law from West Malaysia.
Alas she was too old to turn the stone and she didn't make cakes much anymore. she needed my muscles to turn the heavy stone. I have good memories of this because she would guide me along, not too fast or not too slow. She would spoon little spoons of rice into a hole in the middle of the stone. If I went too fast, I would knock her with the long pole handle. It was hard work. I forgot what cake she made, but the memories of this grinding rice to flour forever remain in my mind.

Grandma wore her Traditional Chinese pants and top with frog buttons. She wore her long hair in a bun. This was taken in 1982, the last time I saw her dressed in the very traditional style of dress and hair.

The next and last time was in 1986 when I went to show off my daughter to her. Grandma had permed her hair. I couldn't get used to it. She explained that short permed hair was easier to maintain.

Grandma died shortly after this. She was in her late 80s. I did mention that part in the book. Grandma was a very clean woman, even when she was dying, she insisted on having a bath everyday. The nurses complained having to bath her, but they told my sister Elizabeth that this was Grandma's virtue. She prided in her cleanliness. She died a very clean woman. She had Elizabeth and Kallang to bid her Good bye when she went.

***All Chinese women her era wore jade bangles. It is not a cosmetic jewelery. The Chinese believe that Jades have protective elements. Tales have been spun that the jade bangles have protected them.***
http://ann-mythoughtsandphotos.blogspot.com/2011/07/peekaboo-touching-movie.html

This morning, I went for my dental appointment. I told my dentist about my book. She told her receptionist. SC said her mum had 5 babies, and 3 survived. They never talked about the dead babies during her time. Babies were buried while the mums were still in hospital. A friend said her mum was offered someone's healthy baby to substitute for her dead baby. How cruel is that?

Just last night, Ann, I talked again with my mother about her first baby who died at 5 months of age in 1945. My mother still remembers her enormous sadness at losing this baby just as she mourns the loss of her last baby who was still born in 1963.

These babies span twenty years and my mother had nine live babies in between but the ones she never forgets are those who did not make it.

I had a miscarriage once and although it was early, the grief of that loss has never left me.

This is an often neglected issue. Thanks for promoting the film.

Reply to Ginny: I have no idea where that baby came from, I suspect that it was an abandoned baby. That was a era when it was very shameful to be an unwed mother. When I had Andrew, I remember there was an abandon Asian baby. It was in the news paper. I even discussed about adopting this baby. But I only wanted my own child, so I didn't discuss further. I did not write this in the book, because I wasn't so sure.
Posted by Ann, Chen Jie Xue 陈洁雪 at 5:32 PM