Empty arms, It's ok to cry.

When I wrote my book, Diary of a berreaved mother, it was to help new

bereaved mothers and to help myself.  Every so often I meet newbies. I haven't

posted this you-tube for a while. and There is a certain mum in Christchurch I am 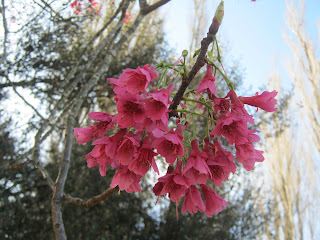 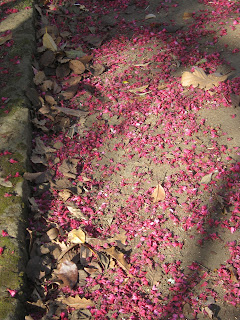 Prunus campanulata is a species of cherry native to Taiwan, widely grown as an ornamental tree, and a symbol of Nago, Okinawa in the Ryukyu Islands of Japan. It is variously known in English as the Taiwan cherry,[3] Formosan cherry, or bellflower cherry.

I used to mistake this for the Sakura cherry tree. They lined on both sides of Balmoral road where I used to live before Andrew was born, and later when we came back to live after 16 years in Singapore.

In 1989, the word Campomelic came to my vocabulary. It was the syndrome that Andrew had and killed him. Campanulata makes me think of that word. The Campanulata cherry  blooms ahead of the Sakura, then very quickly the flowers drop and fade away.

This is the time when the Campanulata cherry  blooms are most pretty. At the time, at Andrew's birthday,  Balmoral road would be one scarlet hue. Then on his death anniversary in November, the trees would be bare. Empty like my arms.


Next month would be  Baby Loss Awareness Week. I remember the interview I did

for the Television documentary," It is ok to cry." Here I am, telling myself it is OK


Shortly after Andrew died, we went to Goldcoast Australia. The guide at the Koala centre at Currumbin Sanctuary told the water engineer to hold the Koala and be gentle with it like a baby. My heart cried.

Hospital refused to scan for baby

By melissa.wishart@wanganuichronicle.co.nz - Wanganui Chronicle
9:00 AM Saturday Mar 14, 2015 3 comments
Having been told they had had a miscarriage, a Wanganui couple spent a night grieving for their lost child ... only to learn the baby was alive and well.
Crystal Waitokia and her partner Chance Muir are upset at the misdiagnosis - and that they were refused an ultrasound scan which would have confirmed the baby's health.
They were delighted that an appointment the following day to find the cause of the supposed miscarriage actually found a healthy pregnancy - but they don't want other parents to go through the night of heartbreak they did.
The couple were in the emergency department of Whanganui Hospital on March 1 because Miss Waitokia had been suffering cramping and bleeding 12 weeks into her pregnancy, and a doctor mistakenly told them they'd had a miscarriage.
"At first we didn't believe it," Ms Waitokia said. "We went to the hospital to rule out a miscarriage - we never actually expected to have one."
She had suffered similar symptoms two weeks earlier and went for tests at the hospital to find out her baby was fine. The second time it happened, the doctor gave them the diagnosis after only looking at her blood test results.
Mr Muir asked for an ultrasound to double check, but was told there was no point, Miss Waitokia said.
They went for a specialist follow-up appointment to determine what had caused the miscarriage, but as soon as the scan came up on the screen, the baby was "jumping around ... and you could see the heartbeat," Ms Waitokia said.
"We just started crying, we were just super happy, we were jumping up and down ... it was a happy moment but we weren't too happy with the doctor that diagnosed it."
Whanganui District Health Board surgical services clinical director Mark Stegmann said the doctor's miscarriage diagnosis was understandable given Miss Waitokia's clinical presentation.
But a definitive diagnosis of miscarriage should not usually be made without confirmation, either by a repeat blood test some days later or by an ultrasound scan, Dr Stegmann said.
The doctor "regrettably" told the patient she had miscarried before they had this confirmation.
The doctor in question discussed the blood test result with a senior doctor and referred her to the early pregnancy clinic for confirmation the following day.
It was not a case of one doctor making a judgment call on their own and there was no indication that an urgent ultrasound scan was needed, Dr Stegmann said.
"The health board regrets that this happened and we acknowledge how upsetting it would have been for the patient and her partner."
Miss Waitokia, who quit smoking when she found out she was pregnant, immediately went home after the diagnosis and had a cigarette.
"If it wasn't so late we would have stopped at the bottle store and drowned our sorrows as well," she said.
The couple, who have two other children - a 2-year-old girl and a 10-year-old boy - have laid a complaint with the hospital over the incident.
"I don't think it was the hospital's fault," she said. "We just want the doctor to learn a bit more about pregnancy."

For more articles from this region, go to Wanganui Chronicle
By melissa.wishart@wanganuichronicle.co.nz

Sort by
Only one person can be pregnant. Only one person can have a miscarriage. 'We' cannot have a miscarriage nor can 'we' be pregnant if 'we' means a male and female.
jobama - Auckland Region - 11:55 AM Saturday, 14 Mar 2015
Maybe all these Drs need to go back to Medical School for a refresher course on facts and handling of patients. Too much of these medical misadventures happening, I know you might think your right but we are hearing of too many of these things in the medical professional area.
Christine Anne - 11:55 AM Saturday, 14 Mar 2015
I had the same thing happen to me at Wellington Hospital and under the same circumstances as this contributors - during a 'post-miscarriage' ultra-sound to pick up the cause, a strong heart beat (and baby) was 'picked up'. Our son is. Now 6...very healthy and happy!
Posted by Ann, Chen Jie Xue 陈洁雪 at 9:35 PM 1 comments

From China to Borneo and Beyond –
Ann Kit Suet Chin-Chan

I discovered this book, when I was at my printers
having some of my work printed. I picked up the book,
and was intrigued to read parts of it, as I flicked
through the pages.

Who was Ann Chin? I took a photo of the cover, and
added to my face book page and did the usual google
search. We made contact via face book, and had a
meeting. We swapped books – as you do.
Describers by the author as “a hundred year old
journal of two families, the Chans and the Kongs.”
recorded from 1907 to 2006. “From Kwang Zhou,
China, to the jungles of Borneo. It is a six generational
record with the second wave of movement to England,
Canada, Japan, Singapore, Australia, USA and New
Zealand.”

“The Opium war, virgin tropical jungle, Japanese
World War, colonial days, a revolution, a fight with the
communists; these were harshness and the difficulties
the families had to go through.”

Ann writes lovingly of each family person, from her
childhood memories, and gives us descriptive insights
– “Grandfather Kong … loved a drink or two, not too
much to make him drunk. When he visited us Mother
would offer him a bottle of Guinness Stout, an egg and
a big mug before her retired to bed. He poured the
stout into the mug, broke the egg into the stout and
drank the concoction. The creamy effervescent gave
him a white mustache on his upper lip and he made a
slurpy sound as his tongue licked the froth off… . We
used to cringe…when he swallowed the raw egg which
had sunk to the bottom of the mug. ”

The book is well written, and provides a distinctive
contrast to the lives that our own newly arrived New
Zealand forebears suffered during this period. It makes
me feel that they had it good.

And is currently working on a new book.
Posted by Ann, Chen Jie Xue 陈洁雪 at 1:24 AM 1 comments