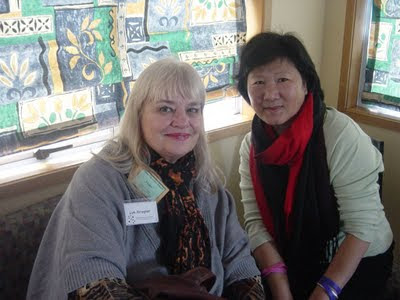 Lyn Kriegler is a book illustrator, scriptwriter and oral storyteller. Originally from the United States, born in a town at the Niagara Fall. Her career as a staff artist and art director saw her work for a variety of organisations such as Mademoiselle, The New Yorker, and the Washington Post.

In 1974 Kriegler immigrated to New Zealand and has since illustrated 22 picture books, seven chapter books and 25 readers. In 2006 she illustrated Margaret Mahy’s Family Surprises, and more recently she has written her own book, Mister Minty (illustrated by Blair Sayer).

I was very honored to spend time with Lyn when she came to my school to speak to the children. She gave me two illustrations and one was signed. She told the kid who got one that he could sell it on Trade me. We talked about my next book.
Posted by Ann, Chen Jie Xue 陈洁雪 at 3:14 AM