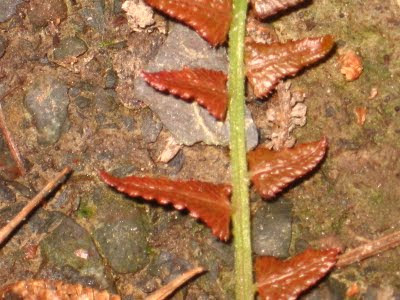 I choose this one frond of a fern found in the bush. Nature has stained it red. Red like the blood of the Kahui Twins, and growing wild in the bush because their mum had neglected them.

If there is a bereaved mother in New Zealand that nobody has anything good to talk about. It is the mother of murdered 3 month old Kahui Twins.Chris and Cru Kahui died of massive abused wounds, and everybody hushed up, and the police and judge could not convict anyone.

In July an author announced the publication of his book in collaboration with the mother. There were national wide protest. Two big book chains will not stock this book. The book will be launched next week.

As a bereaved mother, I don't know if all the drugs and P and her undesirable lifestyle had immuned her. I would not be buying her book.

A Facebook group has been set up urging people not to buy a book written in collaboration with the mother of the Kahui twins.

As the inquest into the deaths of three-month-olds Chris and Cru Kahui inches forward at the Auckland District Court, a Facebook site called "Boycott the Macsyna King Book" has been set up in response to the news that the twins' mother, Macsyna King, is about to release a "tell-all book", written by journalist Ian Wishart.

Chris Kahui Snr was charged and later acquitted of the boys' murder in 2008 and King's involvement has been questioned, including by Kahui's defence team at the trial.

"Somebody like this should not be allowed to profit from preaching her perverted view of the horrific events which led to the deaths of the only two children who hadn't already been taken from her by CYF's," the Facebook site says. http://www.facebook.com/pages/Boycott-the-Macsyna-King-Book/140832719326817
Posted by Ann, Chen Jie Xue 陈洁雪 at 8:55 PM