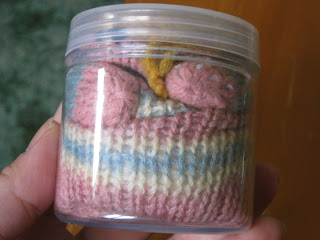 Right timing for me, my daughter came back from abroad 7 years, and I was delighted she kept her precious knitted doll.

She kept it in a clear plastic canister and the customs officer in the airport ask her what it is.

Here is the history from my book: Diary of a bereaved Mother, Goodbye my baby.

One day, Deborah was very excited. Some kind ladies had knitted lots of little dolls for the hospital and left them at the crèche. Andrea told her to bring one bag for Andrew, and one bag for the rest of the little babies in Ward 11A.  There were more than 10 dolls in Andrew’s bag. She chose a doll that she wanted to give to Andrew, another for Gabrielle’s gift to Andrew, and finally mine. She chose the one I liked very much. She chose one for herself and one for Gabrielle. Then she confidently went to all the other six nurseries to distribute them to the rest of the ICU babies.
When Andrew died, I asked his nurse if she would pack a doll for him to take it to Heaven, meaning it would be buried with him. I was very happy that Nurse Daphne chose the one that I had given him. She kept the puppy dog, as she knew I wanted to have it back. Whoever those ladies were who knitted the dolls, I wish I could thank them. I hope all the other babies that day survived and took their dolls home.
On 16th December, 2010, Mrs. Nesbitt, one of my British blogging friends, posted photos of knitted dolls of the Nativity scene. She invited readers who wanted the patterns to tell her and she would email to them. One of the dolls was Mary holding Jesus. It looked very similar to the doll I gave to Andrew. I told her I was interested in her patterns, and would explain why I wanted to knit one. She sent them to me the next day. It seems so strange that after 21 years, I get to see a doll that meant so much to me and at the time when I am writing this book.

The PhotoHunt for this weekend is Knitted.

Dora commented on FaceBook " It's going to be hard for me to find something for next week theme "Knitted" since I don't knit . . . I believe I'll really have to stretch it about and go out side of the box "