Lantana and a good friend. 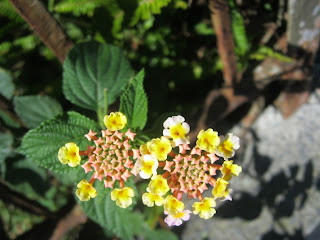 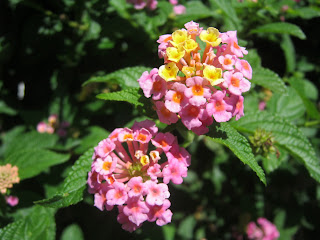 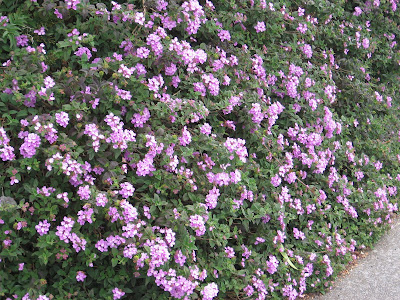 Last week, I walked past this Lantana bush, (Close-up photos) and thought it was time I repost on the Lantana because it's been 5 years since I did the original post. Today, my ABC meme, there were 2 post on the Lantana. The flower reminds me of my flatmate and best friend when I first came to New Zealand, and other story is about family in Australia. Grace was a very exceptional friend, she came to Andrew's funeral and burial.

The name is Lantana. originally from Mexico. In Malaysia and Singapore, the common name is Bunga Tahi Ayam or in Cantonese, KAI SEE FA, both meaning Chicken Shit Flower. There is no prize for guessing why.

I remember this with fond memories of my flatmate of two years, Grace. from Penang in 1978.

One summer, her parents and sister came to visit her. The sister went to pluck this pretty flower outside the garden to put as a centre piece on the dining table. We were have a big feast cooked by Grace's mum.

Then she said," CHOW! CHOW!" meaning smelly. She had to take a shower because she felt smelly all over. Even then, she still felt smelly.

As for the bunch of flowers, needless to say, it was thrown as far as we possibly could.

And the food, we waited for the bad smell to dissipate before we ate them.

When I was living on the campus of Nanyang University, I was the secretary of the gardening club and had a online gardening journal. I wrote about wondering why people would want to plant this KAI SEE FA. There was a bush in NTU.

When my plants get stolen, I concluded that the person planting this KAI SEE FA is actually smarter than I think. Nobody would want to steal his KAI SEE FA,

Come to think of it, it relates to the Lady of the Night flower or the 7-mile flower. This must be a sister. The flower looks very pretty, but is rotten inside. The Chinese have a song, LU BIAN DE YIE WAH BU YAO CHIA, translated as the wild flowers on the road side, do not pick, the actual meaning is don't go for outside women when you have a wife.

In Australia, Lantana is a obnoxious weed, and there is a lot of studies devoted to this plant.

My older brother was a gentleman farmer before, and he had first hand knowledge about this plant and has this to say about Lantana.

This lantana plant is grown in Perth as an ornamental decorative potplant and they are only a small plant.

But in Queensland the plant love the climate and in the wild they can grow up to 10 feet tall and about 15 feet diameter and spread very rapidly. They are very hardy and hard to kill.

When we were in the farm there were about 150 acres of lantana in our farm. We need to use helicopter to spray and then use a bull dozer to dig up the roots and then burn them. After that we need to use the helicopter to sow the grass seed and fertilise and hope for the wet weather to grow the grass. After we have cleared then we need to repeat he whole process once very 3 or 4 year or they will grow back again! Very hard work and expensive. In the 6 years in the farm we only managed to clear about 50 acres of lantana!

The local farmers told us that in the early 1950s they hired cheap Chinese labour to use their parangs to cut and dig them out and then burn. In those days they didn’t use machines or chemical!

My second sister, and her husband, both retired principals and now are hobby farmers suggest that the roots be dug up and burnt. The trouble now with environmental issues and the haze, the Malaysian government has banned open fires.