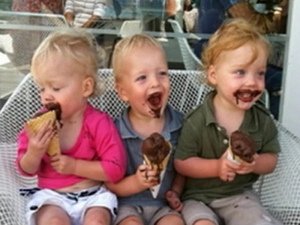 A public memorial service will be held today for the New Zealand triplets killed in a mall fire in Doha, Qatar.
Lillie, Willsher and Jackson Weekes were among 19 people killed when the fire broke out in the Villaggio mall in the Gulf state two weeks ago.
Today's service at Wellington Cathedral St Paul's is open to anyone to attend, and will be available to watch live over the internet for the many friends and family of the Weekes family who are not able to make it.
The family said they felt it was important to open the service to members of the public, as they had been overwhelmed by the love and support they have received since the two-year-olds died.
A Facebook campaign has been set up to encourage well-wishers who can not make it to the memorial to release a trio of helium balloons at 4pm and take photos of them floating into the air.
The public memorial service will be followed by a private funeral to lay the toddlers to rest.
Today's memorial service will be live-streamed on tvnz.co.nz from 1pm


The family has requested people attending to wear their children's favourite colours, red, purple and blue and to donate to the Wellington Neonatal Trust. What a wonderful family, in the midst of their sorrow, they think of others.

http://tvnz.co.nz/national-news/wellington-memorial-triplets-killed-in-doha-fire-4919053
My heavy heart is with Jane and Martin Weekes, had been in Qatar for the past five years. They returned to Wellington to give birth to the triplets after they were conceived using IVF. It was strike 1 for me when Andrew died. But for Jane and Martin to lose 3 especially when they came after IVF and when they survived their premature state.