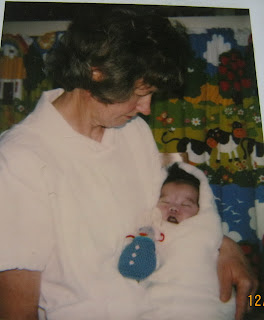 This photo is very very special. Andrew was prepped to meet his coroner so that the doctors could learn about this rare syndrome. We were happy from day one when Dr James asked this difficult request. What we didn't know was Daphne his favourite day nurse had two photos taken with him when he had become an angel. She got the NICU office to pass the two photos to us. She had wanted to take photos of him. She really loved him.


Here was Dapne giving Andrew his feed. He had only a little test tube amount. One of us held the syringe/test tube while waiting for the force of gravity to make the milk go down through a tube in his nose. He had a special dummy made of clear silicon. 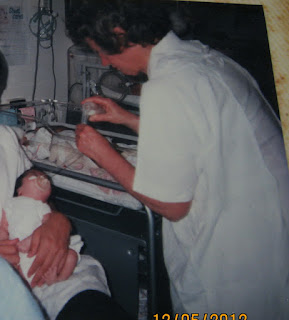 It's National Nurse's Week, May 6th. through May 12th. So thank a Nurse.

There were two bestest nurses in the whole wide world. I wish I could tell them in their face.

We arrived at Andrew’s nursery. Betty was holding him.
Betty said, “He won’t bounce back this time.”
She gave him to me. I just held him. He was very still and had his eyes shut. He wasn’t blue or black, just a bit pale. He was at peace. The charge nurse came and told me that they had sent for the doctor. She further explained that they had sent a security guard to the Nurses’ Home to get me, but I didn’t open my door. That was why they couldn’t get me earlier. I told her that I had told the nurse on duty that I was going home to sleep that night. Somehow, that message wasn’t relayed to the next nurse on duty. They apologised and I said, it didn’t matter, I was here.
It took a while before a young doctor came. He used his stethoscope to listen to Andrew’s heart.
He said, “I can’t hear anything.”
I said thank you God, for taking Andrew at last. I came in time to say goodbye to him. To “Soong Chung.” This was what I had wanted to do from day one, so he wouldn’t die alone.
We went to the breast-feeding room. Betty kept explaining what had happened. The charge nurse told me it was best for Andrew. I didn’t cry. Betty had said that she had bathed Lo and Andrew at 4am. Usually it was the morning duty nurse’s job, but she wasn’t very busy, so she helped out.
I was so glad that, when Andrew went, he was a clean baby. Mum and my sister Elizabeth said Grandma Kong was very clean when she went. Betty had just stripped Andrew’s cot of the blue quilt. She wanted to take it home to wash it together with Lo’s quilt. This, the other nurses told me, was not the duty of Betty. She did it because she loved these two babies. Such was the dedication of these special nurses. Betty fed Andrew at 5am. At 5.10am, she checked him and found that he had stopped breathing.
I was grateful for the extra attention Betty had given to Andrew, much of which I didn’t even know. Betty chose the softest nappies for Andrew because Andrew felt uncomfortable with the others. Betty said she would stay with me until Chen Onn and the girls came. The hospital must have rung to tell Chen Onn that Andrew was really dead this time. I wanted to be alone with Andrew, but I didn’t want to be rude. I knew she had good intentions and she wanted to comfort me. She had been such a good nurse.
I told myself that I would have plenty of time with Andrew later on. But I told her, “I will be alright; you will need to do your work.”
Betty said, “I will stay.”
Someone brought a tray with tea. Betty kept saying Andrew had had a settled night, and she did not think he was going to die. At 2am, when she went for her tea, she asked the nurse at the next nursery to check on him. He was settled then. She told me that, though the nurses all knew that Andrew was terminal, none of them wanted him to die on their shift. She had nursed him for so long. It was hard losing him.
I still didn’t cry. I kept saying, “Andrew didn’t want to go to Green Lane Hospital,” Over and over again.
Betty said, “I didn’t want Andrew to die on my shift.”
But Andrew had his own plans. He wanted to die towards the end of his special night nurse’s shift. By dying at 5.30am, he was still there when his other special nurse; the day nurse Daphne could come and say goodbye. Daphne comes at 6.30 am. How uncanny is that? Had he died in the middle of their shifts, it meant only one nurse would be there to say good bye.
I told his favourite nurses Daphne and Betty, he loved them so much because they loved him. He would rather die than leave them. It sounds like a soap opera, but was actually a reality show.

On 28th April 2011, I went back to Dr Aftimos to present him my book. He said it was an honour to receive it. He took me to a tour of the NICU. I had not been back for 21 years, and I garnered a lot of mental energy. They had relocated the hospital and up graded it, and that has made a lot of difference. I asked a nurse if she knew Daphne, Andrew's favourite nurse and she said yes. She told me that Daphne had retired and I was so happy to hear that she got married. I had a tinge of sadness his night nurse Betty had died.