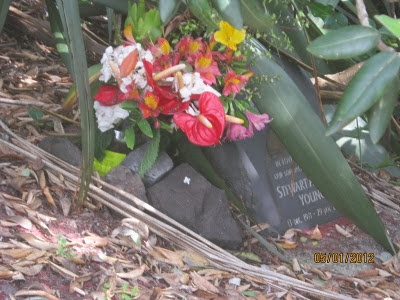 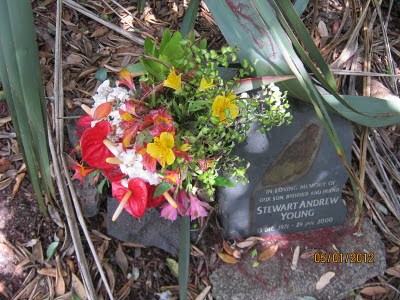 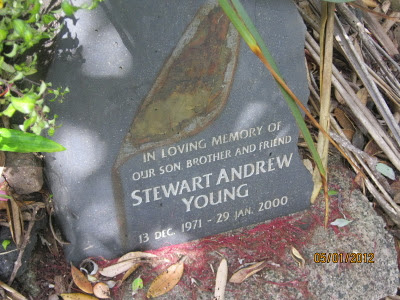 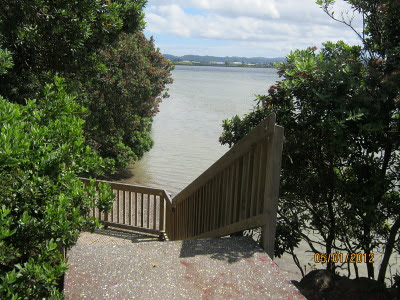 It is summer here, and so is swimming and water sports. I just watched the news that there are two drownings.

http://annkschin.blogspot.com/2009/01/warrior-star-drowning-at-bethells.html Bethells Beach, west Auckland, where the rising rugby league star twenty years old Sonny Fai was presumed to have drowned late in 2009. This is a favourite post of mine when I teach my students about water safety. They know about their sports hero, and this will sink in their little head.(Sorry the pun). The students especially remember this drowning and whisper, " He died!"

I was at a public reserve, (I decided to keep this place anonymous) when I saw something red in the bush. I wanted to go over to take a photo for my Ruby Red and Rednesday meme. Upon getting closer, my heart sank. Someone had drowned there. I don't think this is grave, but a memorial. A mother has lost a son. A waka/boat had stopped sailing.

Just recently, in Kuching Sarawak where my Dad chose to live his last days, there was a serious flood. Two persons died, a young student and her rescuer. The found the bodies at Sungai Maong, Kuching, Sarawak after the flash flood that hit Kuching last 2 days. It is harrowing, I lived in this area before I came to New Zealand. The victim wasn't even swimming, she was driving her car and the king tide and heavy rain caused these tragedies.


When I was very little, my grand dad used to tell us about the drowning of his 4th son.

Here is the excerpt.

I thought of two women in my family who lost their children. One was my paternal Grandma Chan. First, my fourth uncle, aged four, drowned swimming in Rejang River in Borneo.

We were frequently told how my Grandpa Chan cried aloud.

He lamented, “God, why did you take this favourite son of mine? Why couldn’t you have taken one of the others?”

Even when he was in his seventies, he was telling us his loss and how all the women folk sighed and shook their heads. He might be a grieving dad, but he shouldn’t have cried to his god to take one of his other sons. He gave him a grand funeral, which was unheard of at that time for a little boy. That little boy had a younger brother to call him, “Ah Ko” which meant big brother, so it was fitting that he had a funeral and be remembered.

Every year, at Ching Ming Festival, Grandpa led all of us to pay respect to his poor son. Forty years later, Grandpa, aged almost eighty, wanted to move Fourth Uncle’s remains to a new cemetery to a new grave next to his, Mum and Dad and Grandpa went to dig some dirt to put in a little box. It was a symbolic gesture to remove his remains. Mum said that Grandpa dug and dug, and there was nothing. It was very hot under the tropical sun, Mum told him to stop, he would find nothing. He refused; eventually he found a sole of a tiny shoe. Mum said that Grand Pa had loved his son very much. He had buried his little son in a pair of leather shoes when most people walked barefoot at that time.

Email ThisBlogThis!Share to TwitterShare to FacebookShare to Pinterest
Labels: bereavement