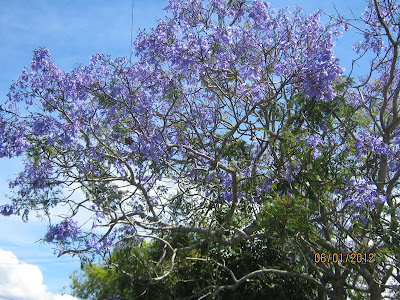 Jacaranda Mimosifolia The jacaranda tree is a tropical beauty with its clusters of fragrant, purple, trumpet -shaped blooms. For all the trees that were chopped prematurely. I chose this Jacaranda tree, the last time I was with mum in 1986, we were walking around the streets of Gold Coast. We both marvel how beautiful this purple tree it. I took this photo yesterday, and had no idea I would use it today.

With this morning's hot air balloon accident in New Zealand, I thought of the many bereaved people left behind by the eleven who died. There are bereaved parents, grand parents, spouses, and children. Those who died, hopefully were in pain for a short time when the fire exploded. But it is those left behind who are suffering the excruciating pain for a long time. Some of the family were actually following the hot air balloon and saw the tragedy unfold in front of their eyes.

The first time I experienced a youngish man's death, was my dad's very good friend. He had gone to England with dad in his late 20s. They continued to be good friends when they came back to Borneo. When he was 40, he collapsed and died of a heart attack. I was 15, and his oldest daughter was 14. Dad and mum took me to visit her mum and her. Mum said, I was nearest to her in terms of age. We went to her home in the evening before the funeral. I went and talked to her, and said something like I am so sorry, that she was so young and her dad died. We were not in a huggy culture. I can't even remember if I held her hand. I cried for her and for myself that I was glad my dad was alive.

When I was 33, mum died tragically in a terrible accident in Australia. Dad didn't want me to go to her funeral because I was at my late stage of pregnancy. Mum was 60, and I took this very hard. I couldn't sleep for many months, and my solace was writing. I wrote about mum as a child, I wrote about mum as our mum. Mum of 9 kids.

Recently, my brother Joseph told me that cousin M's husband aged 50 was very sick with cancer. His next email was he had died. I had never met this man. Cousin M was much younger than me, something like 10 years and I had not seen her more over 35 years. I cried for her. I recall one incident we cousins had which is in the niche of all those present. I wrote in my posts in my other blogs of the playground. I sent an email to her brother to send my condolence.

Poor M, she was very young when her husband died. He left behind two daughters in their early twenties. Last month, I was liaising with her sister C when we chatted briefly about M's bereavement. Then I connected with A who commented on C's Facebook. I asked her who she was, and she replied that she was M's daughter. Bereavement is not easy for her.

When I wrote my book, one of the reasons was to help the bereaved. I told A that I would like to do a post on her in light of the hot air balloon accident this morning in New Zealand.

I want to tell my cousin M that it is OK to cry, to niece A and her sister, cry, you don't have to be strong, and to all the bereaved families of this morning's tragic event, CRY!!!!!
Posted by Ann, Chen Jie Xue 陈洁雪 at 7:08 PM

Email ThisBlogThis!Share to TwitterShare to FacebookShare to Pinterest
Labels: bereaved